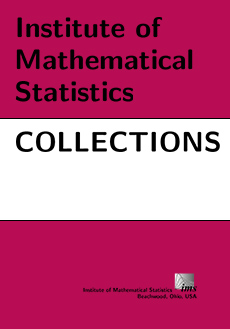 This will count as one of your downloads.
You will have access to both the presentation and article (if available).
DOWNLOAD NOW
Title and Copyright Pages

DOWNLOAD PDF
Asymptotics of Maximum Likelihood without the LLN or CLT or Sample Size Going to Infinity
Charles J. Geyer

Presented here is a combination of Le Cam style theory involving local asymptotic normality (LAN) and local asymptotic mixed normality (LAMN) and Cramér style theory involving derivatives and Fisher information. The main tool is convergence in law of the log likelihood function and its derivatives considered as random elements of a Polish space of continuous functions with the metric of uniform convergence on compact sets. We obtain results for both one-step-Newton estimators and Newton-iterated-to-convergence estimators.

A Markov chain is geometrically ergodic if it converges to its invariant distribution at a geometric rate in total variation norm. We study geometric ergodicity of deterministic and random scan versions of the two-variable Gibbs sampler. We give a sufficient condition which simultaneously guarantees both versions are geometrically ergodic. We also develop a method for simultaneously establishing that both versions are subgeometrically ergodic. These general results allow us to characterize the convergence rate of two-variable Gibbs samplers in a particular family of discrete bivariate distributions.

The Expectation-Maximization (EM) algorithm (Dempster, Laird and Rubin, 1977) is a popular method for computing maximum likelihood estimates (MLEs) in problems with missing data. Each iteration of the algorithm formally consists of an E-step: evaluate the expected complete-data log-likelihood given the observed data, with expectation taken at current parameter estimate; and an M-step: maximize the resulting expression to find the updated estimate. Conditions that guarantee convergence of the EM sequence to a unique MLE were found by Boyles (1983) and Wu (1983). In complicated models for high-dimensional data, it is common to encounter an intractable integral in the E-step. The Monte Carlo EM algorithm of Wei and Tanner (1990) works around this difficulty by maximizing instead a Monte Carlo approximation to the appropriate conditional expectation. Convergence properties of Monte Carlo EM have been studied, most notably, by Chan and Ledolter (1995) and Fort and Moulines (2003).

The goal of this review paper is to provide an accessible but rigorous introduction to the convergence properties of EM and Monte Carlo EM. No previous knowledge of the EM algorithm is assumed. We demonstrate the implementation of EM and Monte Carlo EM in two simple but realistic examples. We show that if the EM algorithm converges it converges to a stationary point of the likelihood, and that the rate of convergence is linear at best. For Monte Carlo EM we present a readable proof of the main result of Chan and Ledolter (1995), and state without proof the conclusions of Fort and Moulines (2003). An important practical implication of Fort and Moulines’s (2003) result relates to the determination of Monte Carlo sample sizes in MCEM; we provide a brief review of the literature (Booth and Hobert, 1999; Caffo, Jank and Jones, 2005) on that problem.

Bruno de Finetti was one of the most convinced advocates of finitely additive probabilities. The present work describes the intellectual process that led him to support that stance and provides a detailed account both of the first paper by de Finetti on the subject and of the ensuing correspondence with Maurice Fréchet. Moreover, the analysis is supplemented by a useful picture of de Finetti’s interactions with the international scientific community at that time, when he elaborated his subjectivistic conception of probability.

We develop algorithms for sampling from a probability distribution on a submanifold embedded in $\mathbb{R}^{n}$. Applications are given to the evaluation of algorithms in ‘Topological Statistics’; to goodness of fit tests in exponential families and to Neyman’s smooth test. This article is partially expository, giving an introduction to the tools of geometric measure theory.

This paper explores an approach to Bayesian sample size determination in clinical trials. The approach falls into the category of what is often called “proper Bayesian”, in that it does not mix frequentist concepts with Bayesian ones. A criterion for a “successful trial” is defined in terms of a posterior probability, its probability is assessed using the marginal distribution of the data, and this probability forms the basis for choosing sample sizes. We illustrate with a standard problem in clinical trials, that of establishing superiority of a new drug over a control.

In this paper we formulate a corporate bond (CB) pricing model for deriving the term structure of default probabilities (TSDP) and the recovery rate (RR) for each pair of industry factor and credit rating grade, and these derived TSDP and RR are regarded as what investors imply in forming CB prices in the market at each time. A unique feature of this formulation is that the model allows each firm to run several business lines corresponding to some industry categories, which is typical in reality. In fact, treating all the cross-sectional CB prices simultaneously under a credit correlation structure at each time makes it possible to sort out the overlapping business lines of the firms which issued CBs and to extract the TSDPs for each pair of individual industry factor and rating grade together with the RRs. The result is applied to a valuation of CDS (credit default swap) and a loan portfolio management in banking business.

DOWNLOAD PDF
This article is only available to subscribers. It is not available for individual sale.
Get copyright permission